Russia has dismissed claims that Moscow is behind the global food crisis.

Russia and Ukraine supply over 40 percent of the world’s grains and wheat, but the invasion of Ukraine by Vladimir Putin’s armed forces has caused a disruption of Ukraine’s inability to export grain out of its Odesa sea port as Russia’s Black Sea Naval fleet controls the waterways.

Much of the Arab world and Africa is badly affected by grain shortages caused by Russia’s war in Ukraine.

A landmark deal signed on Friday July 22 to resume Ukraine’s grain exports hangs in the balance after Russia attacked targets in the port of Odesa on Saturday.

In a speech to Arab League ambassadors in Cairo, Egypt, Russia’s Foreign Minister, Sergei Lavrov, said Western nations were distorting the truth about the impact of sanctions on global food security. 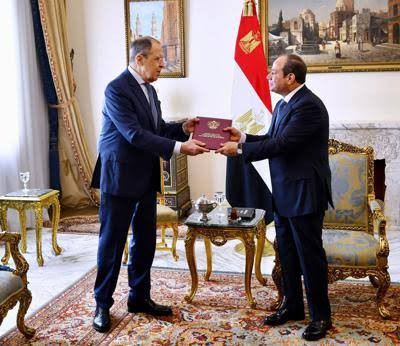 He accused Western nations of trying to impose their dominance over others.

Lavrov says he will go on to visit three African nations to rally support amid anger over the Russia-Ukraine war.

Lavrov said that Western nations’ “aggressiveness” in imposing sanctions on Russia indicated one simple conclusion: “It is not about Ukraine, it is about the future of the world order.

“They say everybody must support a rules-based world order, and the rules are written depending on what specific situation the West wants to resolve in its own favour.”

After his talks with Shoukry, Lavrov told a joint news conference that the West was prolonging the conflict even though it understood “what and whose end it will be”.

Many dead after Russian missile strike in Desna – Zelensky laments