Rising from a four-hour National Security Council meeting yesterday, President Muhammadu Buhari once again issued fresh directives to security agencies to rescue all those in captivity across the country and advance the acquisition of intelligence.

The National Security Adviser (NSA), Babagana Munguno, disclosed this to State House correspondents after the first council meeting of the year chaired by President Buhari.

He said the President was not happy with the prevailing security situation and has remained a very sad man following deteriorating security in the land on account of the failure of the military and other agencies to tame the menace. 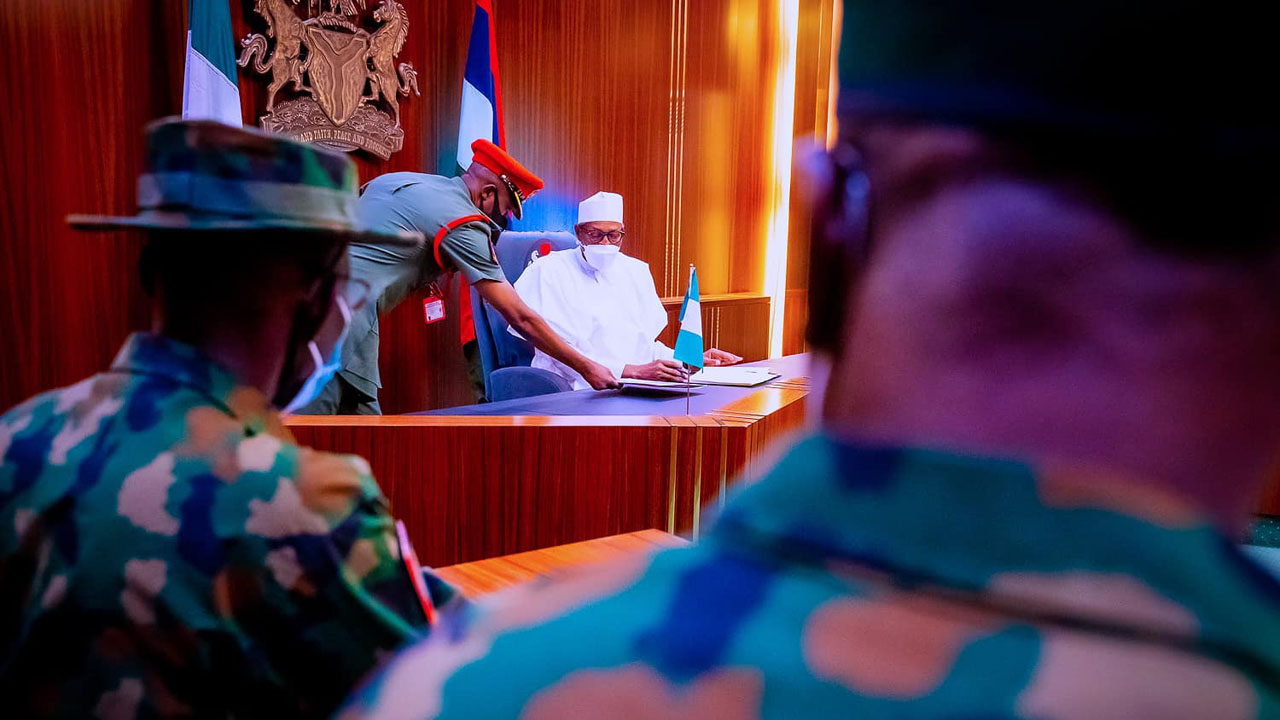 According to him, the last straw was the recent attack on the Abuja-Kaduna train leading to the killing of some passengers and kidnapping of scores.

He said insufficient technology and human intelligence, particularly from the wider society, has led to the persistent war and unless this is defeated, the war might become insurmountable.

Joined by the Minister of Defence, Maj Gen Bashir Magashi (rtd) and the Inspector General of Police, Alkali Baba Usman, Monguno said the President cannot be happy when people are being killed left, right and center on a daily basis.

Conveying President Buhari’s demeanor, the NSA said: “A lot of lives are being lost, how can the President be happy in a situation when people are dying? If 10 times something happens, 10 times he will be unhappy and as the father of the nation, he has to express his displeasure.”

However, the NSA said President Buhari has ordered the immediate rescue of all kidnapped persons unhurt using the train attack as a basis.

Monguno stated that the President alone cannot completely receive the blame for insecurity in the country as his part (President) is to make strategic decisions, which he has been doing.

“You know, he is just at the managerial level, he gives us instructions. And his displeasure is probably because he feels enough is not being done. So we can’t put this thing on his shoulders completely. He’s at the strategic level, he takes the decisions, but when these things become endless, he has to express concern. And that’s just what he did.”

Fielding a question on why it was difficult to deploy technology, especially in some areas where the military has been having problems, the NSA said: “One, technology is expensive. Technology takes time to acquire since we do not produce this very delicate equipment.”

The NSA criticised the Kaduna State governor, Nasir el-Rufai, over his comments on security, saying that the governor’s comments could compromise security. He criticised el-Rufai for being a loudmouth, adding that he could indirectly help terrorists restrategise and in turn, endanger those in captivity.

He said this while responding to a question on el-Rufai’s claim that the military failed to act despite intelligence reports made available to them early enough on the hideout of bandits and planned attacks.

“El Rufai’s comments could compromise the security situation as the bandits can relocate to other destinations if they know that their current hideout is known. The governor spoke about the security agencies knowing who they (bandits) are and where they are. Again, that is dangerous.

“When you start talking too much. You give away a lot. Now, even if they say we know where they are, that in itself is already a problem. Because once you say it, whether it is true or false, the person who has your people in captivity will move to another location. So, sometimes it is best to just keep silent, mum is the word,” the NSA said.

WEIGHING in on rising insecurity, former President Olusegun Obasanjo has said the creation of state police would be a better option than community policing. Obasanjo made this disclosure when the leadership of the National Association of Ex-local Government Chairmen in Nigeria paid him a courtesy visit in Abeokuta.

Obasanjo, who commended the initiative behind the formation of the body, said the development clearly showed that some local chairmen were better than even the top elected leaders.

The former President, while responding to one of the speakers, Chinwe Monu-Olarewaju’s submission on the creation of community police to curb the wave of insecurity, said the idea needed to be changed.

RIVERS State Governor and Peoples Democratic Party (PDP) presidential aspirant, Nyesom Wike, has said the establishment of state police will be an enduring approach to address the festering insecurity in Nigeria.

A statement by the Special Assistant to the Governor on Media, Kelvin Ebiri, said the governor while wooing party delegates in Taraba State yesterday, dismissed the argument against the need for state police.

“The Federal Government cannot stop this insecurity if there is no state police. You must have state police, there are no two ways about it. Having state police does not mean you will not have federal police. All over the federal system, even councils have their own policy, so that you employ people who know the environment.”

The Rivers governor said those opposing state police often argue that if allowed, governors will use it against their opponents.

Similarly, the Taraba State governor, Darius Ishaku, also harped on the need for the creation of state police. He lamented the state of insecurity in Nigeria and expressed optimism that if the PDP returns to power in 2023, the party will restore the lost glory of the country.

FORMER governor of Anambra State and PDP presidential aspirant, Peter Obi, yesterday, said with the level of insecurity in the country, Syria has now become better than Nigeria. Obi stated this when he visited the leadership and delegates of the party in Imo State to inform them of his presidential ambition.

“You wake up every morning in Nigeria and hear things that happen in Afghanistan and Pakistan. Even Syria is now better than Nigeria because we have a failed government.

“Nigeria is owing more debt and there is no way in the next three years the government would be able to survive with the debt. No country survives it. The only way out is to have a production economy and not a sharing economy.

“We have borrowed over $100 billion and this country cannot generate power. When we look at the whole thing, we have come to change the economy from sharing economy to a production economy,” he declared.

The Minister of Labour and Employment, Dr. Chris Ngige, also backed the call for state police. He made this known when he appeared on Channels Television’s Politics Today last night.

When asked, the Minister aspiring to succeed President Buhari in 2023, said he will introduce state police to every hamlet.

“Of course, you will remember that as governor of Anambra State, the federal police was withdrawn from me and I was exposed, but I had to put together vigilantes (Bakassi Boys) and paid them N30,000 each every month to provide security in the state.”

BUT the International Crisis Group has said vigilante groups in Nigeria need “strong oversight” to avoid worsening the country’s security challenges. The group stated this in its report titled: ‘Managing Vigilantism in Nigeria: A Near-term Necessity,’ which was released yesterday.

There have been concerns about the activities of vigilantes in recent months, especially in relation to them operating without recourse to legal provisions.

In 2021, the Yan Sakai vigilance group, which operates in communities across the North and has been accused of carrying out reprisals when residents are attacked, was proscribed by several state governments. In Benue, where communities have come under attacks in recent years amid the signing of the anti-open grazing bill into law, the state government, in May 2021, disbanded all vigilance groups set up without legal backing.

With increasing attacks by gunmen across the country, more vigilance groups are springing up in states. According to the report by Crisis Group, vigilance organisations are growing in number as a result of the country’s security challenges, but without proper training for the operatives, adding that their activities could make things worse.

“Nigeria has seen a proliferation of new vigilance organisations to fight crime and protect the public. Vigilantes have filled the gap left by the federal police, which has largely failed to curb insecurity across the country. Yet, poorly trained or supervised, the groups could, over time, exacerbate rather than mitigate insecurity,” the report reads.

“Some question their constitutionality as well as their effectiveness. Some vigilantes have also been known to commit grave human rights violations and, more recently, the emergence of ethnically exclusive groups could further strain ethnic or other communal relations.”

“Without stronger oversight, many worry the situation could get worse, with further and potentially more egregious abuses, deepening the prevailing culture of impunity and aggravating insecurity,” Depagne said.

According to the report, the federal and state governments must build a framework to ensure that vigilante groups in the country are effectively regulated.

“To reduce reliance on vigilantism, Abuja needs to rebuild trust in the state’s capacity to provide security to all citizens,” the group said.

MEANWHILE, amid rising insecurity, about 173 soldiers have been deployed to keep peace in Guinea Bissau as part of Nigeria’s contribution to global peace. The Chief of Operations, Army Headquarters, Major General Oluwafemi Akinjobi, disclosed this while speaking at the pre-deployment training graduation of Nigerian contingent to ECOWAS mission in Guinea Bissau.

Speaking at the Martin Luther Agwai International Leadership and Peacekeeping Centre Jaji, Kaduna State, he said: “Since independence, Nigeria has contributed over 100,000 troops to over 40 countries on peacekeeping missions.”

Represented by the Chief of Operations, Major General Zakari Abubakar, Akinjobi noted that Nigeria remains the beacon of peace and the gatekeeper of the ECOWAS sub-region. He maintained that Nigerian peacekeepers have helped restore peace in many conflict areas around the world, which has earned them many national and individual commendations from several missions.

He added: “The nation continues to strive to ensure security and stability in Africa through collective security by contributing to international peace and security, which is essential to Nigeria’s defence policy.”