Nigerian businessman, Mompha has issued a warning to Bobrisky after his name came up in the cross-dresser’s social media clash with former BFF and actress, Tonto Dikeh.

In chats Tonto Dikeh released which captured the “genesis” of her fallout with the cross-dresser, Bobrisky called out the actress for not turning up for his birthday and also not telling him that Mompha donated towards her charity organisation.

Reacting to Bobrisky’s comment, Mompha warned the cross-dresser to desist from mentioning his name in any fight he has with Tonto or any other person, as they would be meeting in court if he continues towing same path.

Admitting that he gave Tonto the money, he however countered Bobrisky’s claim of giving out the money without his knowledge. Mompha claimed that it is a “deliberate attempt by Bobrisky, who is notorious for seeking attention through every means (including blackmail), to smear and ridicule his personality before the world”.

Insisting that Bobrisky is not his friend, he stated that he is a devoted Muslim and does not associate with gay people as his faith forbids it.

My attention has been drawn to a statement credited to Idris Okuneye (aka “Bobrisky”), which is currently receiving traction across the social media. In the said statement, Bobrisky stated that I gave Tonto Dikeh the sum of N300,000.00 without his knowledge. I wish to state that this is not only untrue, but a deliberate attempt by Bobrisky, who is notorious for seeking attention through every means (including blackmail), to smear and ridicule my personality before the world.

Rather, it was Bobrisky who informed me that Tonto Dikeh accused me of being too stingy, which I refuted as untrue. The truth is that I only gave the sum of N300,000.00 to Tonto Dikeh for her foundation when she pleaded with me to support her pet project. It has however come to my knowledge that Bobrisky was actually at loggerheads with Tonto Dikeh, and resorted to use my name to discredit her before the general public.

I want the general public to know that Tonto DIkeh is just a friend like every other friends I have both within and outside Nigeria, and there is nothing hidden in my friendship with Tonto Dikeh or anyone whatsoever. Therefore, I am using this medium to sound a note of warning to Bobrisky, to desist from mentioning my name in any fight he might have with Tonto Dikeh or anyone whatsoever as he is not my friend and I do not waste my precious time on frivolities.

Any further attempt by Bobrisky to drag me into his issues will be addressed by my lawyers in court. PS. I want it to be in the public that I, Ismail Mustapha, as a devoted Muslima and a family man have never and will never associate myself with gay people. My faith forbids it. 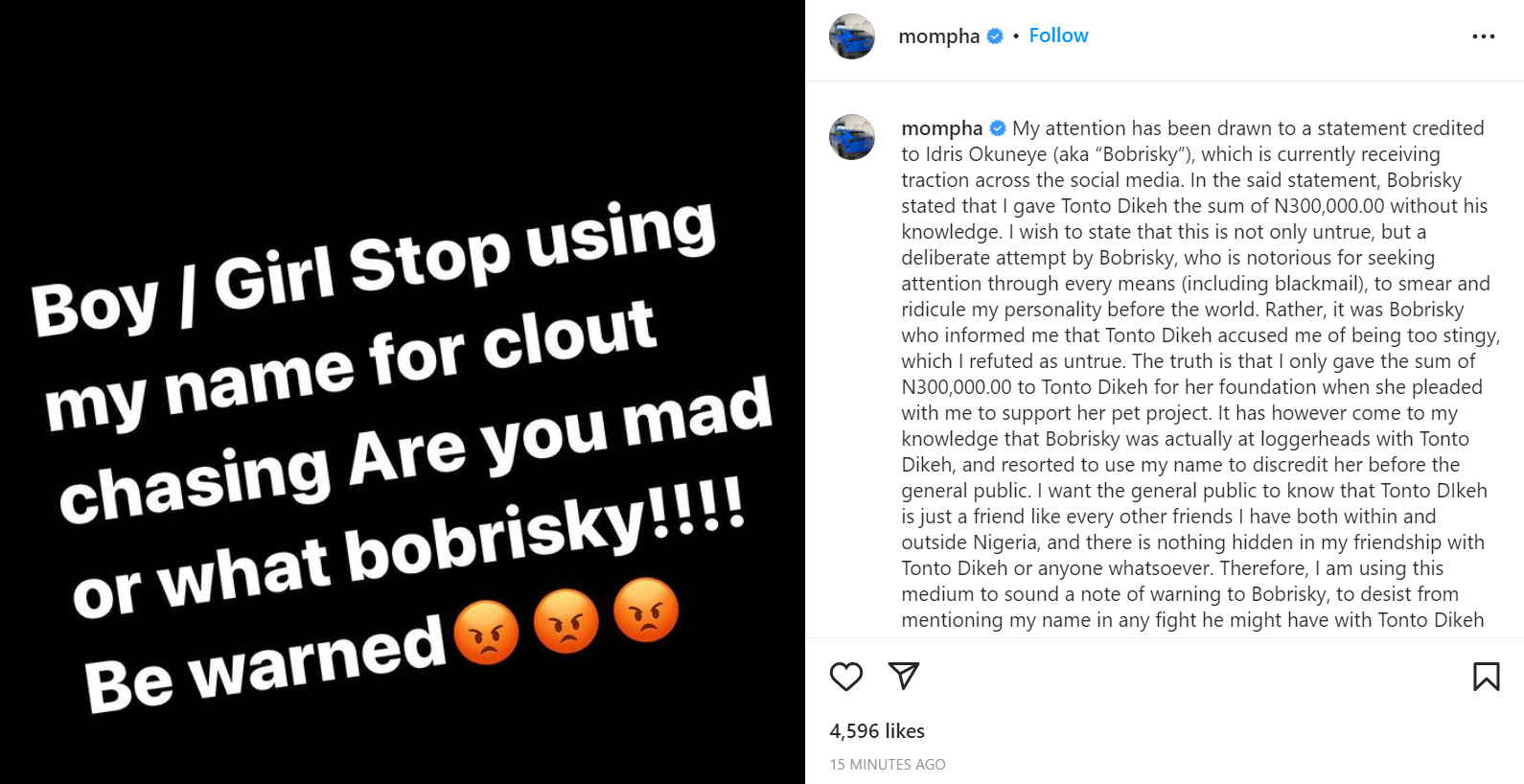